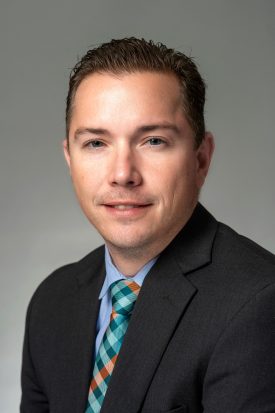 Darren is a central Illinois native who started with Harrington Law LLC in March 2016. He earned a B.S. and an M.B.A., with honors, from Hawaii Pacific University before receiving his Juris Doctor at the University Of Valparaiso School Of Law in 2012. Prior to joining the firm, Darren provided legal representation to corporate and individual clients in the greater St. Louis area as an associate with Sharp-Hundley, P.C. Darren previously worked in JP Morgan’s compliance department and served six years in the United States Air Force where he earned “Airman of the Year” in 2008.

Darren stays involved with the local community as he currently sits on the board for the Champaign County Humane Society and the Don Moyer Boys and Girls Club. Darren is also a devoted member to Rotary (previously serving as both an officer and as a board member).

Darren enjoys spending time with his family and friends when away from the office.